Shopping Basket
Your Basket is Empty
Quantity:
Subtotal
Taxes
Delivery
Total
There was an error with PayPalClick here to try again

Thank you for your business!You should receive an order confirmation from Paypal shortly.Exit Shopping Basket

GENERAL: the most distinctive feature of this cat is its appearance of hairlessness, although Sphynx are not actually completely hairless cats and there should be some evidence of “hair” on the bridge of the nose and the ears. 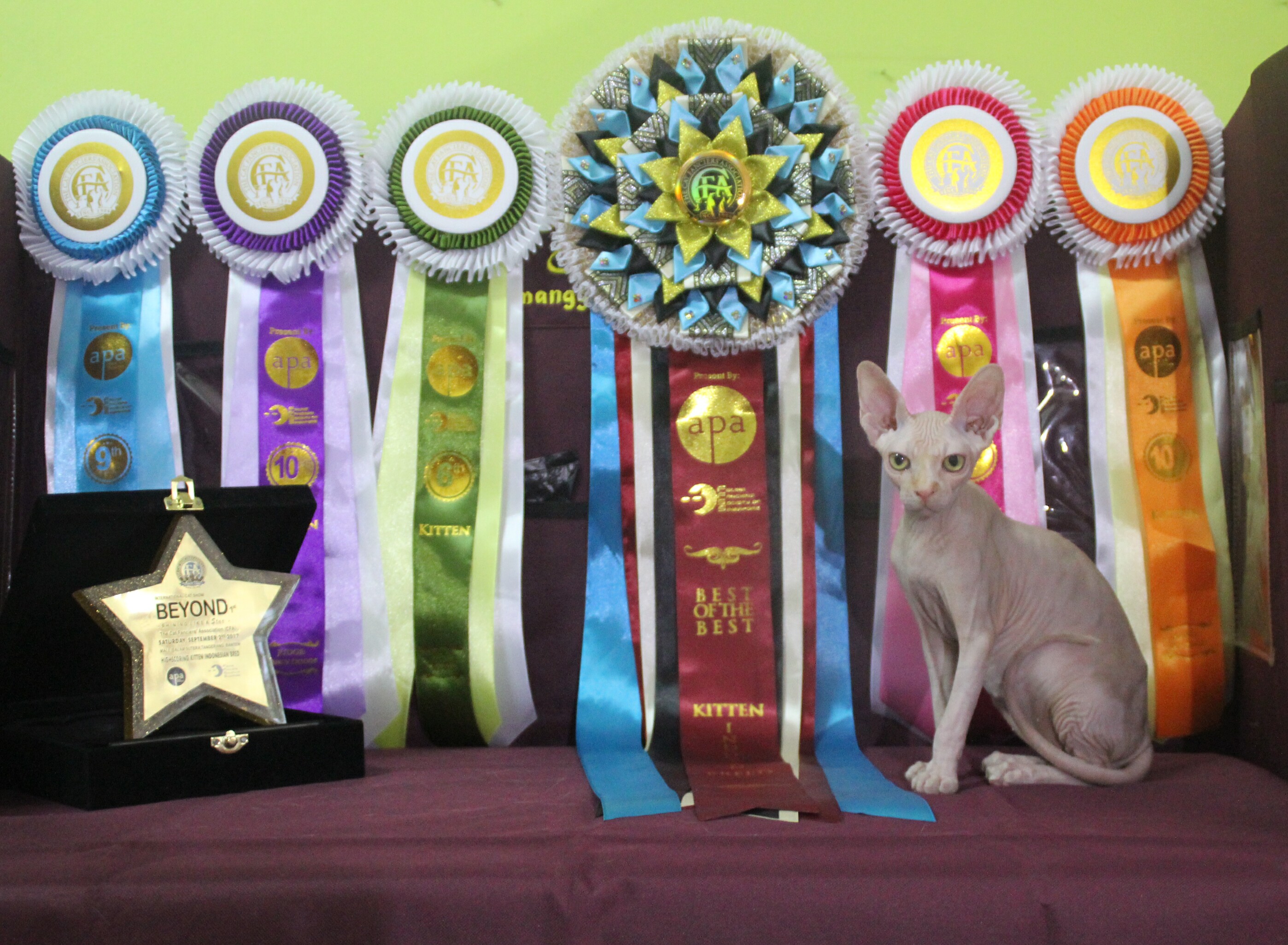 The Sphynx is of medium size and body conformation with surprising weight for its size. Females are generally smaller than males. The body feels warm and soft to the touch, with a skin texture akin to either a soft peach or a smooth nectarine. The Sphynx is sweet-tempered, lively, and amenable to handling.

HEAD: the head is a modified wedge, slightly longer than it is wide, with prominent cheekbones, a distinctive whisker break and whisker pads giving a squared appearance to the muzzle. The skull is slightly rounded with a flat plane in front of the ears. The nose is straight and there is a slight to moderate palpable stop at the bridge of the nose.

CHEEKS AND CHEEKBONES: prominent, rounded cheekbones which define the eye and form a curve above the whisker break.

EARS: large to very large. Broad at the base, open and upright. When viewed from the front, the outer base of the ear should begin at the level of the eye, neither low set nor on top of the head. The interior of the ears is naturally without furnishing.

EYES: large, lemon-shaped, with wide-open center while coming to a definite point on each side. Placement should be at a slight upward angle, aligning with the outer base of the ear. Eyes to be set wide apart with the distance between the eyes being a minimum of one eye width. As no points are assigned to eye color, all eye colors are accepted and should be harmonious with coat/skin color.

BODY: the body is medium length, hard and muscular with broad rounded chest and full round abdomen. The rump is well rounded and muscular. Back line rises just behind the shoulder blades to accommodate longer back legs when standing. Boning is medium.

NECK: the neck is medium in length, rounded, well muscled, with a slight arch. Allowance to be made for heavy musculature in adult males.

LEGS AND FEET: legs are medium in proportion to the body. They are sturdy and well muscled with rear legs being slightly longer than the front. Paws are oval with well-knuckled toes; five in front and four behind. The paw pads are thick, giving the appearance of walking on cushions.

COAT/SKIN: the appearance of this cat is one of hairlessness. Short, fine hair may be present on the feet, outer edges of the ears, the tail, and the scrotum. The bridge of the nose should be normally coated. The remainder of the body can range from completely hairless to a covering of soft peach-like fuzz whose length does not interfere with the appearance of hairlessness. This coat/skin texture creates a feeling of resistance when stroking the cat. Wrinkled skin is desirable, particularly around the muzzle, between the ears, and around the shoulders. There are usually no whiskers but if whiskers are present they are short and sparse.

COLOR: color and pattern are difficult to distinguish and should not affect the judging of the cat. White lockets, buttons, or belly spots are allowed.

legs. Should not resemble the Devon Rex, Cornish Rex or Oriental body type.

GENERAL: all colors and patterns, in any combination, found in felines is acceptable in the Sphynx. Note: exposure to sun will intensify all colors.